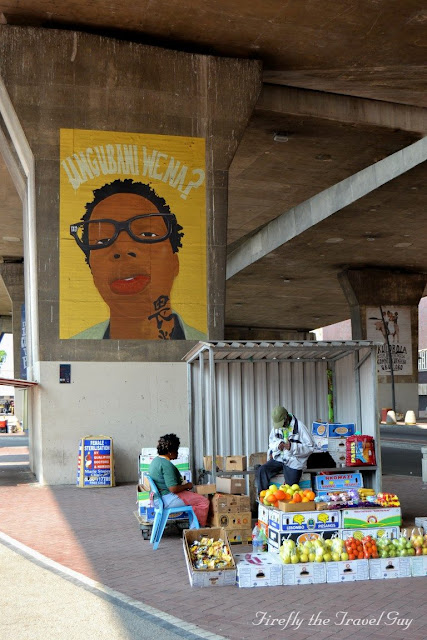 Strand Street under the Settlers Freeway isn't really a place where many of Port Elizabeth's suburban inhabitants wander but if you do you'll encounter interesting scenes, vendors and shops that you won't really find anywhere else. The painting on the freeway support pillar is one of a series of colourful and evocative portraits that depict young South Africans from a range of cultural backgrounds.  It forms part of Route 67 and is called IDENTITIES.
Posted by Firefly the Travel Guy at 9:49 AM 3 comments:

A wine farm in PE? 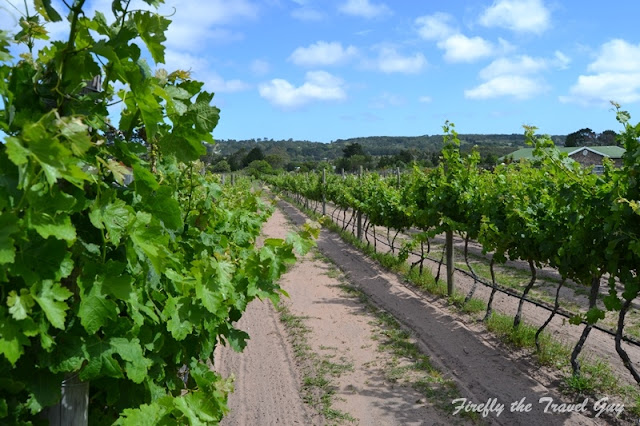 Everybody knows the Winelands in the Western Cape based around Stellenbosch, Paarl and Franschhoek. Then there is the rapidly developing Plettenberg Bay Wine Route.  But did you know Port Elizabeth also have a wine farm?  The Theescombe Estate Wine Farm is located on a 2-hectare smallholding in the Theescombe on the western side of Port Elizabeth.  It's not quite a big commercial wine operation yet, but they do make wine and sell it from the farm.  But why is it called an Estate Wine Farm and not a Wine Estate?  It is because they make all their own wines on the farm using only grapes from the farm.  This means that they don't bring in additional grapes from other farms nor do they send their grapes somewhere else for the wine to be made.  Now you've also learned something today.
Posted by Firefly the Travel Guy at 12:31 PM 3 comments:

The 76 Youth remembered on Route 67 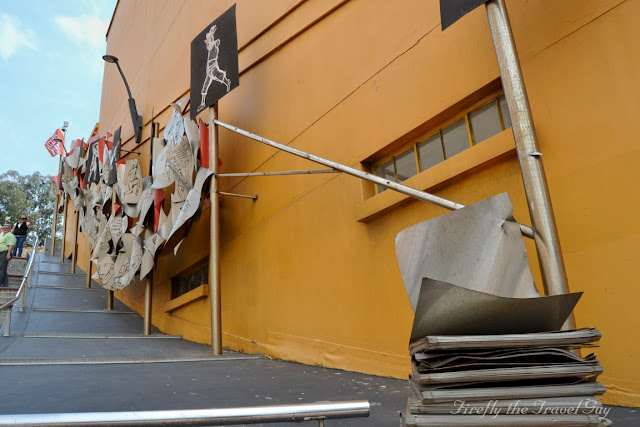 As one follows Route 67 from the city centre up towards the Donkin Reserve you pass the Public Library and St Mary's Cathedral before climbing a set of steps up to Winston Ntshona Street (previously Chapel Street).  The art piece on the wall by the steps is a statement about the 76 generation (referring to the 1976 Soweto uprising) and represents the spiritual journey undertaken by those who fought against oppression.  The art piece takes the form of a pile of newspapers being blown away in the wind and the pages tell the story of the youth.

It's sad though to see that a number of the newspaper sheets have been removed from the lower section of the piece.  Very disappointing to see their remembrance defiled like this.
Posted by Firefly the Travel Guy at 1:00 PM 3 comments:

The Campanile clock and bells mechanism 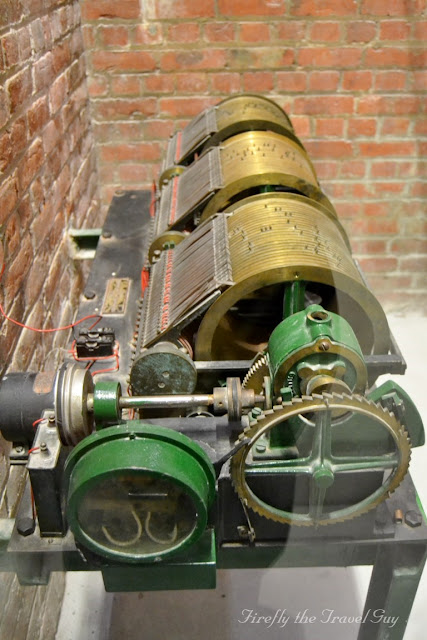 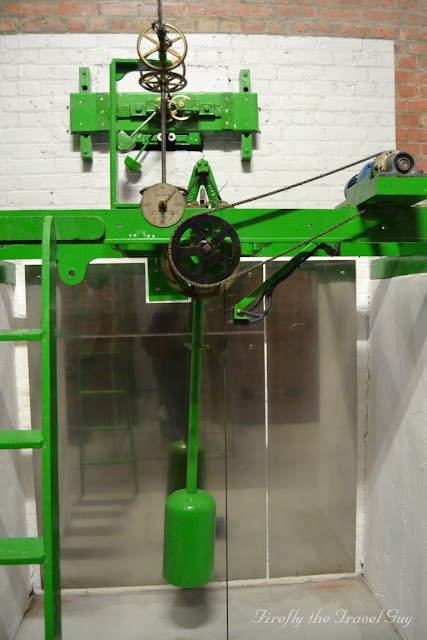 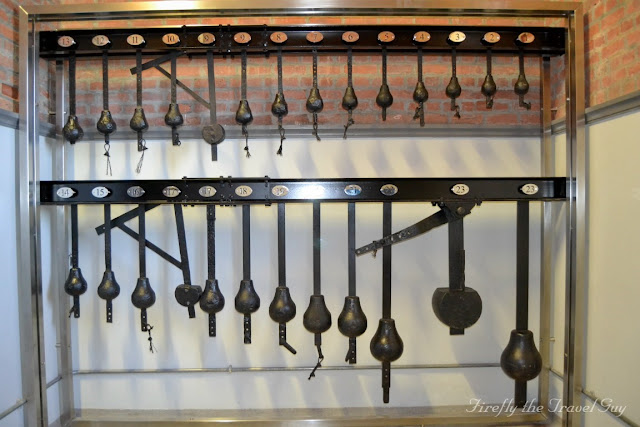 During the renovation of the Campanile bells, the original clappers were replaced with more modern ones that could "reset" to ring the bells a lot faster.  The old clappers have been renovated themselves and have been put on display on one of the levels as you go up the tower.
Posted by Firefly the Travel Guy at 2:40 PM 3 comments:

Export cars on the PE Harbour 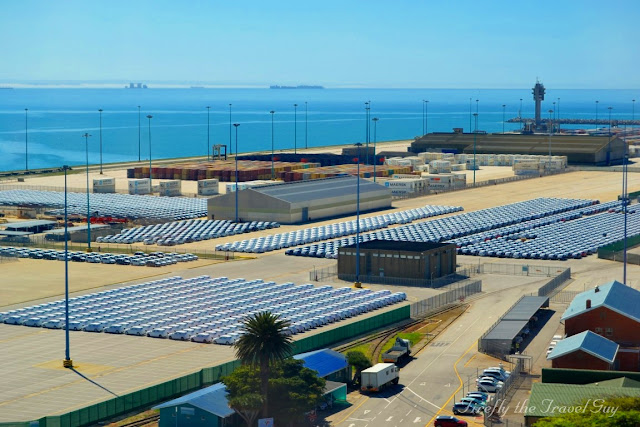 Looking down onto the harbour from the Campanile observation deck, one just can't help but wonder where in the world these cars are being exported to.
Posted by Firefly the Travel Guy at 4:16 PM 4 comments:

A Carillon of bells in the Port Elizabeth Campanile 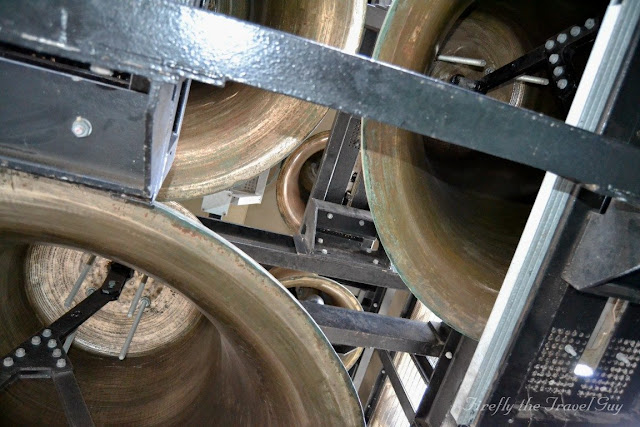 At the top of the Campanile there is a glass trapdoor you can actually see the bells through.  I was lucky enough to go on a tour up the Campanile with somebody from the Mandela Bay Development Agency who was in charge of the renovations and he opened the door for me and allowed me to stick my camera inside. 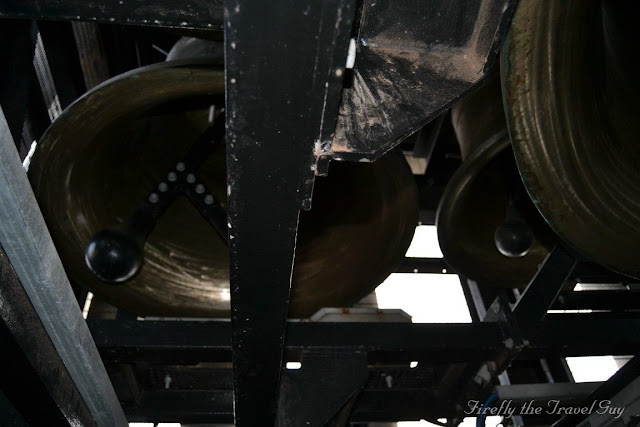 The Campanile originally had 23 bells with another two being added during renovations making it a carillion of 25 bells.

A carillon is a musical instrument that is typically housed in the bell tower of a church or municipal building. The instrument consists of at least 23 cast bronze, cup-shaped bells, which are played serially to produce a melody, or sounded together to play a chord. A carillon-like instrument with fewer than 23 bells is called a chime.
Posted by Firefly the Travel Guy at 1:54 PM 2 comments: 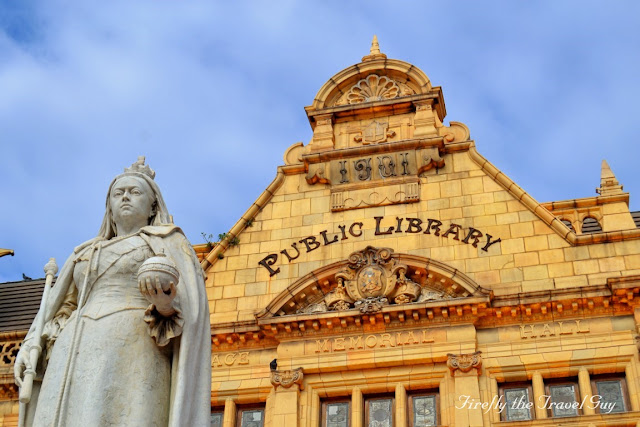 The historic Port Elizabeth Public Library in the city centre has been closed to the public for over three years now with promises of renovations but excuses of no budget.  Well, if you had to pass the library today you won't be able to see the scene in the photo.  It is because the library has been closed off and work seem to have finally started.  Or at least I hope.  An article in the Herald about two weeks ago says work on the structure has no finally started with the completion date around mid 2021.
Posted by Firefly the Travel Guy at 10:21 AM 4 comments: