Anyone for a skinny dip?

Continuing along Marine Drive, shortly after you pass the Rifle Range featured yesterday, you round a bend in the road, and come across a car park looking back across to the Cape Recife Lighthouse. 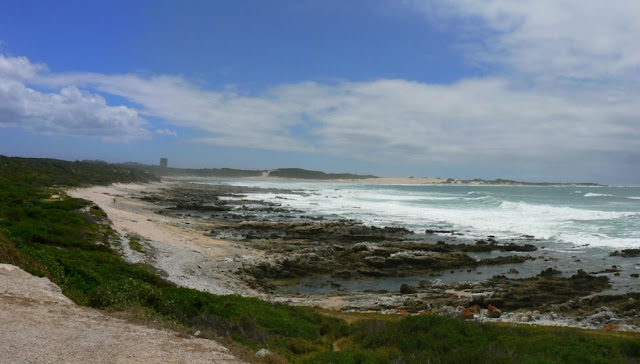 This is known as Shelly Beach, and is home to one of PE's best kept secrets, the nudist beach. To be honest, I don't know if it is still operating as such, because it is many years since we have been there. We live in less repressive times now, but "back in the day" when little boys grew up thinking that women's breasts had little black stripes or stars on them, and nude bathing on the beach was a horrifying crime against society, Sandy Bay in Capetown rose to prominence as a nudist beach. There sun-lovers ran the gauntlet of Police Raids, and it was a sort of badge of honour to buck the system and come back from trips to Cape Town sporting an all over tan!
What many people didn't know was that PE had her own version of Sandy Bay, but it was less famous. Walk along this bay back towards the Rifle Range and lighthouse, and about halfway along, go over the first row of dunes, and there is a natural hollow that overlooks the sea, is perfectly private all round (well it was, I guess the bush clearing might have changed all that :) and, in those days, gave enough warning of approaching cops/voyeurs.

You can see the admin tower of the University to the left, and it is too small to see in this photo, but the Cape Recife Lighthouse is on the distant point to the right.
Posted by sam at 1:42 AM