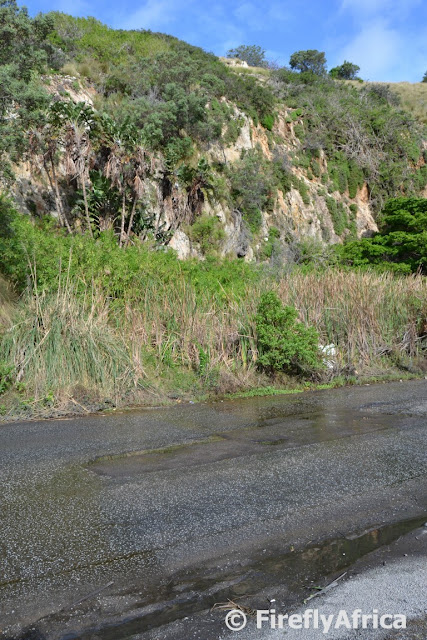 Have you ever wondered why the road at the bottom of Valley Road is always wet?  Why there is water running over the road even if it hasn't been raining.  Well, here is the answer why.
Port Elizabeth isn't really know for it's earth quakes, but that doesn't mean that it's never happened.


There are three ancient fault lines in Port Elizabeth where some slight movements can still occur. One of them, the Moregrove Fault, runs along the Port Elizabeth beachfront from Pollok Beach, Summerstrand, along the shoreline, through the Baakens Valley and ending at the Moregrove quarry near the Kragga Kamma interchange.  Another, the so-called Chelsea- Noordhoek Fault, runs parallel to the Schoenmakerskop coast, while a third fault runs in the Coega area.
In some places in the Baakens Valley the quartzite rocks of the Moregrove Fault is visible.  The old sandstones have been heated to such an extent that all the grains interlock, making it a very hard rock. One side of the rock has dropped down relative to the other as a consequence of Pangea breaking up and the formation of the super-continent Gondwana.  Its this drop that has formed the fault.  The water which continually runs across Lower Valley Road near the old PE Tramways building is underground water seeping to the surface through the Moregrove fault.  This fresh water used to flow into the fresh water lagoon that was situated at the mouth of the Baakens River.  The lagoon was filled in at some stage and the river contained in a channel which is only about two meters wide at this point today.  The water now forms a vlei area next to the cliff before flowing over the road and trickling down to the river.
Posted by Unknown at 2:30 PM