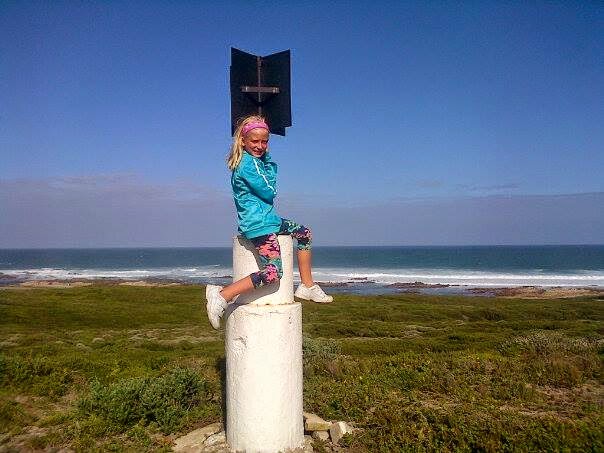 I wonder how many locals know what a trig beacon is or have ever spot the few scattered around town.  Chris and Denise of ChrisDen has put together a nice little Geocaching series that takes one along the Wildside, through Summerstrand and to the back of the airport, discovering six different beacons before looking for the #7 bonus cache.  I took the following about trig beacons from their listings.  Drama Princess decided to monkey onto this one to get a better view of the coastline.


South Africa is fully covered by the National Control Survey System which is of high accuracy and which is marked by a network of trigonometric stations and town survey marks.
The integrated survey system consists of a network of approximately 62 000 control points throughout the country. There are approximately  29 000 white beacons on mountains, hilltops and prominent man-made structures; approximately 24 000 town survey marks of brass stud in a metal box in tarred streets located in 122 cities; and approximately 20 000 benchmarks brass studs set in a concrete base originally along railway lines and alongside roads and highways.
The purpose is to provide Surveyors with a network of known co-ordinates and elevation which are critical for accurate survey for everything from roads, houses, skyscrapers to pipelines and boundaries etc.
This survey system is gradually being replaced by more than 50 active GPS base stations to be known as TrigNet which provides post processing and real time GPS correction data.
The responsible government department has identifies 9 836 trigonometric beacons that will be maintained. These beacons were selected using the following criteria:
Posted by Firefly the Travel Guy at 3:54 PM