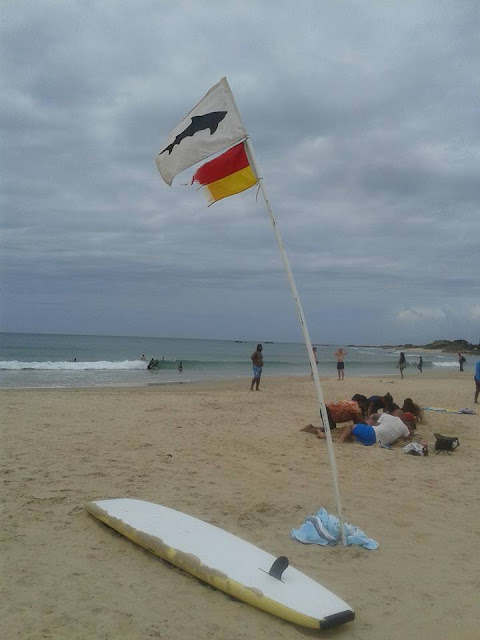 I could not believe my eyes at about lunch time today when I spotted a post of Facebook about a shark warning flag flying at Hobie Beach.  I just had to go and look for myself.  Jip, there it was.  Fluttering on the breeze on this warm and muggy Tuesday afternoon.  I snapped a pic (obviously the one in this post) with my phone and headed for the pier to see if I could spot the shark in question.  I joined a growing group of people as well as two lifeguards scanning the waters around the pier.


The sea was flat and calm and the visibility good so if there was anything we would see it.  Suddenly a British tourist shouted and pointed down to the water.  There it was (confirmed by the lifeguard that it was the same they spotted earlier).  As it swum under the pier and out to sea I cocked my head, squinted my eyes, pouted my mouth and scrunched my nose.  Mmmm, they're probably rather being safe than sorry because what I saw swimming down below couldn't be anywhere longer than a meter if that.  Definitely not a Great White or even a Raggy.  Gully or Sand Shark perhaps?  Heard the lifeguard mention a bull shark.  Really? I didn't want to ask him why he thought that.  Shortly after somebody else spotted a hammerhead just off the end of the pier.  Hammerheads are quite common in the area, people just didn't see them that often because conditions are rarely as good as today.  Seen a few photos on Facebook taken this morning from the pier with hammerheads but the lifeguard was adamant that it wasn't a hammerhead they saw earlier which prompted the closure of the beach.
Anyhow, I had to get back to the office.  My thought was that it was probably much ado about nothing but hey, like I said, better safe than sorry.
Posted by Firefly the Travel Guy at 2:43 PM