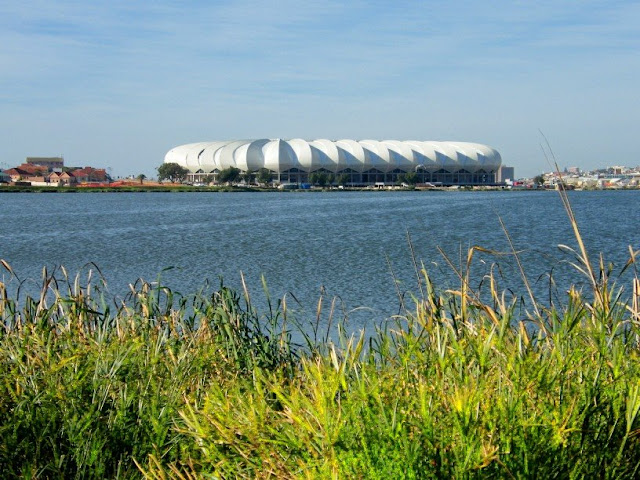 The Nelson Mandela Bay Stadium next to the North End Lake is the 44,000 seat multi purpose stadium (48,000 during the World Cup) purpose built for the 2010 FIFA World Cup.
The five-tier, 1.1 billion Rand (approximately $150m) Nelson Mandela Bay Stadium is one of three coastal stadiums built in anticipation of the 2010 FIFA World Cup.
This is the first world-class soccer stadium to be built in the Eastern Cape. It was supposed to have hosted matches for the 2009 Confederations Cup but was removed from the list as it was believed it would not be ready on time. Well here is some egg on FIFA and the LOC's faces. It has became the first newly-built 2010 Stadium to be completed. It has already played host to a British and Irish Lions tour match attended by 35 000 fans as well as the 2009 Premier's Cup soccer tournament.
After the World Cup the stadium may be used as the home ground for the Southern Kings if they are admitted to the Super 15, as well as Bay United if they return to the Premier Soccer League. The stadium has truly become a new landmark on the Port Elizabeth skyline.
Posted by Firefly the Travel Guy at 9:51 PM