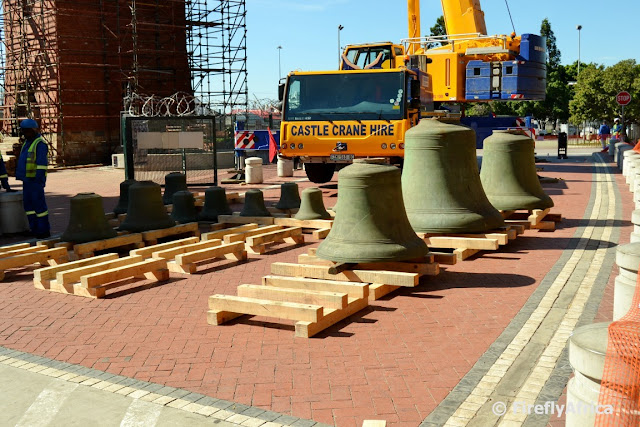 On Tuesday morning I noticed a post on Facebook where the Mandela Bay Development Agency (MBDA) announced that the Campanile bells would be coming down that morning, if the weather allowed, as part of the restoration of the Campanile building.  I was stuck in a workshop and very disappointed that I was going to miss it.  On Thursday morning one of my friends at Nelson Mandela Bay Tourism called me having just heard that the most of the bells were on the ground.  Clearly they didn't come down on Tuesday which meant lady luck was smiling on me.  Drama Princess and her friend DDJ were at work with me so I grabbed my camera and dragged the girls off for a chance of a lifetime to see these magnificent bells up close.  On arrival we found most of the bells on wooden pallets behind a barrier while the crane staff was waiting for the next two bells to be hooked on to be lowered. 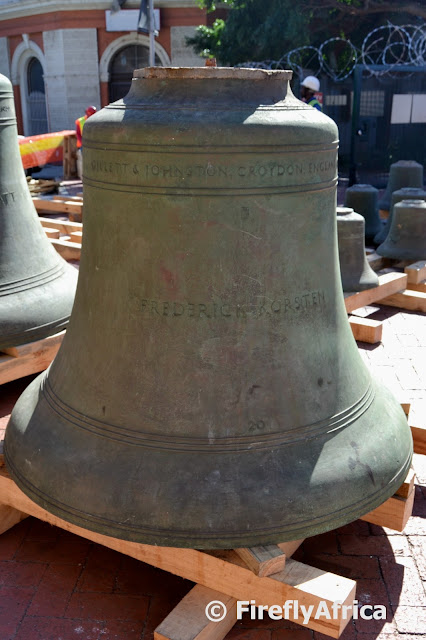 The foreman noticed me taking photos and came over.  I thought he was going to tell me to step back from the barrier and big was my surprise when he started sharing information on the bells with us.  Some of it I knew, but quite a lot I didn't.  The Campanile has a carillon of 23 bells which is the biggest collection of bells in a clock tower in South Africa.  By the time we got there the biggest bell had already been taken away while there were still 5 that had to be lowered. 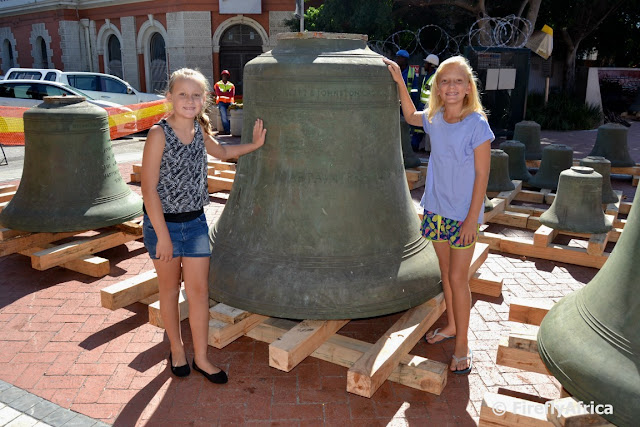 I asked if I could take a picture of the girls with the bell and he said yes. "YES!" I thought.  The girls hopped over the barrier and went to stand next to the Campanile's second biggest bell. "Touch it'" he said. "You'll never get the chance again."  The bell, named after Frederick Korsten, weighs 2,5 tons.  Apparently the biggest one weighs 3,5 tons. Man, how I wish I got there a bit earlier.  I asked the guy what the smaller ones weigh and he answered that they ranged in weight down to about 170 kg for the smallest one. 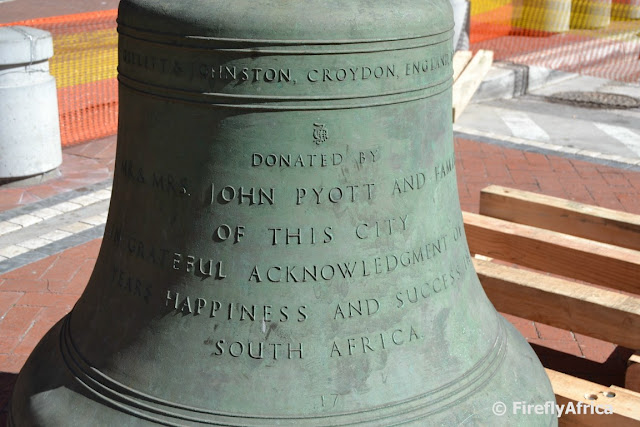 Each one of the bells has a number (1 - 23) and is inscribed as per the wishes of the individual donor/s.  It seems the three biggest bells don't have donation details on them but rather just the names of the prominent Port Elizabeth people they were dedicated to.  In the case of the two that were still there it was Frederick Korsten and Captain Francis Evatt. 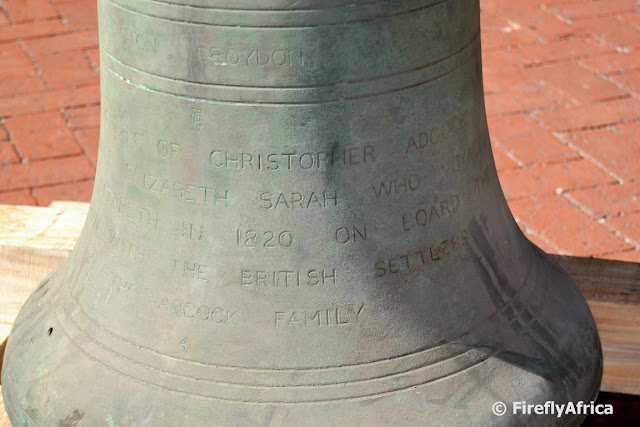 In the case of this specific bell, it was dedicated by the Adcock Family to the Adcocks who came across to Algoa Bay with the 1820 British Settlers. 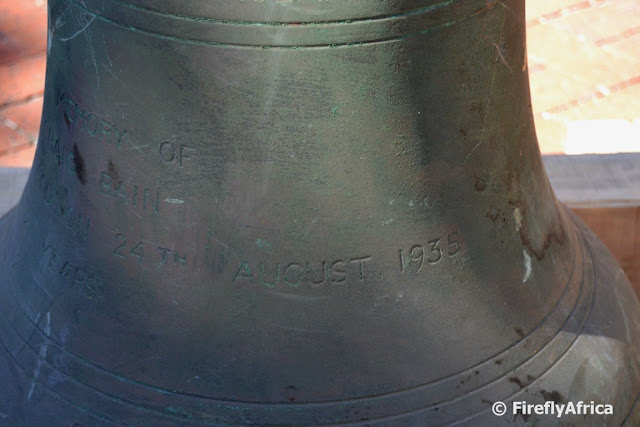 Although the MBDA's media release stated that the bells were installed in 1932, I noticed a date of 24 August 1935 on one of the bells.  I decided to have a look in Margaret Harradine's Port Elizabeth book, my bible for anything historic in the city.  It states that the Campanile's foundation stone was laid in 1921 and it was officially opened in 1923.  The clock was installed in 1925 and started at noon on 28 April of that year.  It doesn't give the exact date of when they were hung but it does state that on 9 September 1936 crowds gathered to hear the first recital of the newly hung carillon of bells.  An interesting thing I never knew was that the bells were originally intended as a civic expression of gratitude for the reign of King George V who died earlier that year.  The book also states that the inscriptions on the bells can be seen in the Campanile (probably on the ground floor) so after the Campanile reopens I'm definitely going to go and look that up. 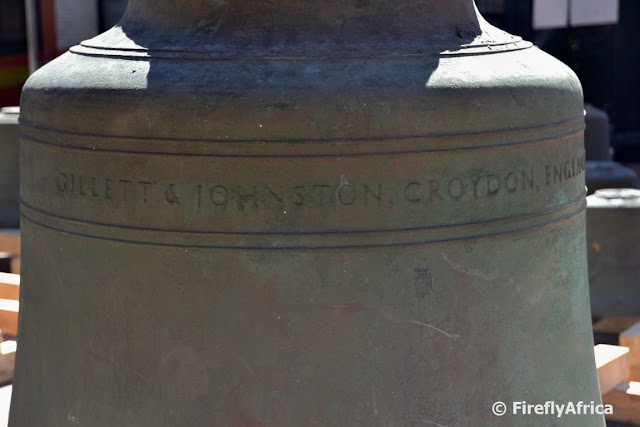 At the top of each bell is the inscription, Gillett & Johnston, Croydon, England.  Gillett & Johnston was a clock maker and bell foundry based in Croydon, England from 1844 until 1957.  Between 1844 and 1950, over 14 000 tower clocks were made at the works, among them the 23 Campanile bells, with many important bells and carillons for sites across Britain and around the world coming from here.

We had to hang around for about 20 minutes or so but I got to take a few photos of the next set of bells being lowered.  That post will follow tomorrow so stay tuned.
Posted by Firefly the Travel Guy at 10:52 PM