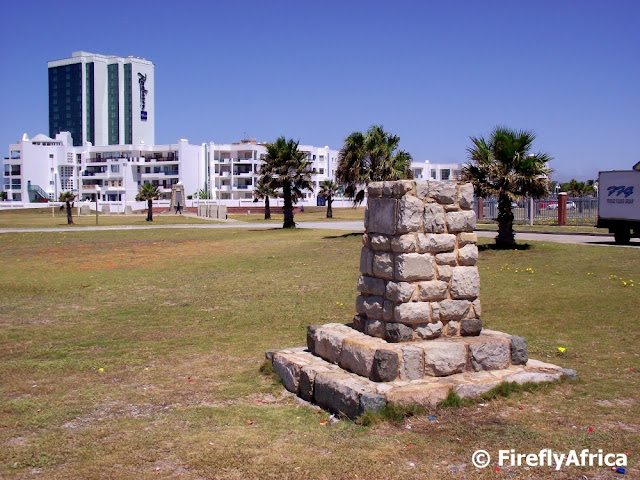 During my weekly tourism slot on LuisterFM 90.6 last week the Lister Memorial in Summerstrand came up in the conversation.  Even though the presenter had seen the stone monument before he had never knew what it was for.  I just realised again that there aren't many people who did know about it and even if you had seen it you wouldn't know who Joseph Storr Lister was.  So I decided to report a post I did about it in January 2011.  Please excuse the recycled picture as I didn't have a chance today to swing past there to take a new photo.

The area along Port Elizabeth's southern coastline which is reached via Marine Drive is where the Driftsands area can be found.  In the late 1800's the movement of sand dunes towards the town was very worrying to the town council and plans were devised to stop the sand from "invading" and overrunning Port Elizabeth.  One of the things done was a railway line that was built along the dunes and all the town's garbage was taken out there by train and dumped on the dunes.  In the late 1880's Josep Storr Lister came up with an idea to stabilise the dunes by planting Port Jackson trees and exotic grasses.  He commenced his work in 1890 and was successful in stabilising the dunes both in Port Elizabeth as well as on the Cape Flats in Cape Town.  Only problem though is that the exotic species have today become a problem in the area and we now work towards eradicating them and allowing indigenous coastal bush to take its place.  A small stone monument stands in Summerstrand next to Marine Drive as a memorial to the work Lister did.  Unfortunately the plaque that told the story on the memorial got wings and disappeared many years ago.
Posted by Firefly the Travel Guy at 10:03 PM