Cricket has certainly moved with the times. For those who find 5 days of stiff-upper-lip play with white clothing and a sedate pace a bit heavy going, there are now new formats which make the game much more exciting. The newest of these is the 20-20 match, which is fast paced, 4s and 6s fly, the music is loud and trendy, gogo dancers and flame throwers go ballistic everytime something exciting happens, the crowds really get involved and the atmosphere is great. 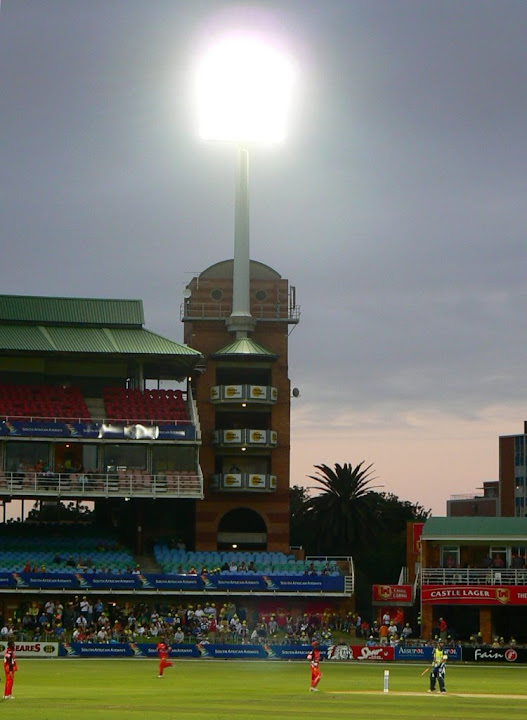 Last night the Sahara Oval was host to a nail biting match between our team, the Warriors (in blue and green) and the Zimbabweans (in red). It is part of an exciting series called the Pro 20, which consists of limited overs matches between teams of up and coming players. Because the games are short, (20 overs a side) they start at 6pm, and make for a great evening of entertainment, ending early enough that kids and old fogies like us can still get to bed reasonably early!!

To the left is the famous Duck Pond Pavillion, designed by award winning architect John Rushmere. 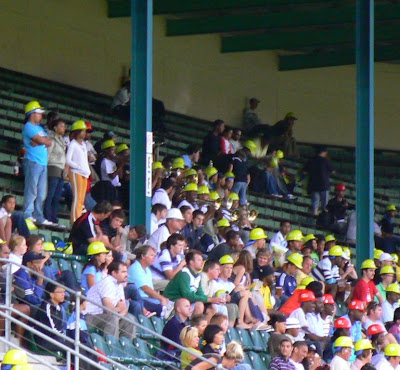 One of the things that makes cricket unique in Port Elizabeth is the St Georges Band, a brass band that sits amongst the crowd and plays enthusiastically during our matches. St Georges is the only pavillion in the country with a resident band, and it really does add to the atmosphere.
You may notice that the crowd are wearing green hard hats, these were handed out at the gate as we entered (if you supported Zimbabwe, you would have asked for a red one, but as you can see they are few and far between!) Anyway the Zimbabweans fielded superbly and also did some exciting batting and running, and they had a well deserved win with the second last ball.
Posted by sam at 7:04 AM