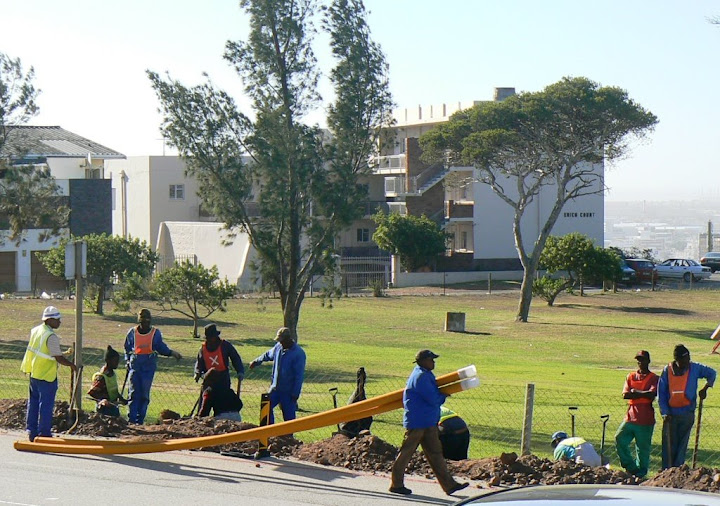 The other morning there was a sudden racket outside our front windows, and investigation revealed that the edge of the park was being dug up. Later on, I saw the orange pipes being dragged along, which confirmed my theory.... this is our turn in part of a huge operation to lay an entire new network of telephone lines throughout the country, for Neotel.

Our telephone system was always government owned, but in 1991 it was partly privatised (the state still controls 39%) The resulting entity was called Telkom, and, to be honest, due to the fact that it has held a monopoly for all these years, not much has improved since so called privatisation. The service remains iffy, and they control all telecommunications in the country, including their competitors, in the form of cellphone and internet providers. They therefore set a minimum price that can be charged by these companies too, and this makes our telecommunications quite expensive. This has led to much anti-Telkom sentiment in the country, where people relieve their frustrations with websites like "hellkom" and "telkom sucks"

Finally, after many years of wrangling (and goodness knows what sort of shady dealings will emerge from the woodwork in time to come) a contract was awarded to another entity, Neotel, to set up in competition to Telkom. And this is the result, orange pipes and digging up of streets are a prelude to (hopefully) improved telecommunications. Still reeling from several cases of corruption and/or bungling of vital services, the South African public seems to have a "we'll believe it when we see it" attitude to this...........

Diane, you asked where exactly we live............. this should give you an idea, this was taken from our front door and in the background across the park is the Old Erica, now an art college. 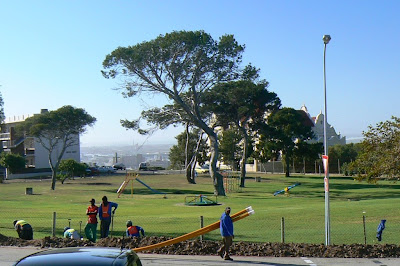