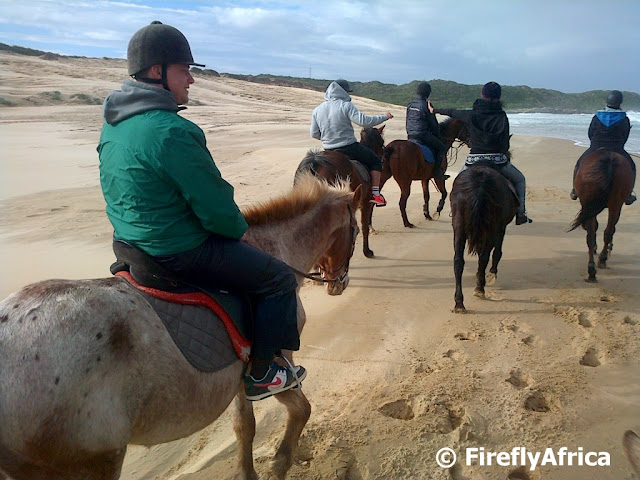 I've been on a horse only twice before. Once when I was in matric and again about 10 years ago.  So I jumped at the opportunity when I was invited for a ride by the friendly ladies at Heavenly Stables on Sardinia Bay Road.  Although there are many stables in the Sardinia Bay area, I don't think many people know that the public can go for rides here as well.  Heavenly Stables offer an 1 hour as well as a two and a half hour ride.  The latter was the one we went on and the trail took us through the Sardinia Bay Nature Reserve through coastal bush down to the beautiful Sardinia Bay beach.  I have to say I was expecting my backside to be sore the next day, but it turned out it was my knees (is middle age setting in?) and calves hurting from banging against the horse. *Phew* Thank goodness.  It was an wonderful experience to go on the ride though and I will go any time again.  Practise does make perfect.
Not being an accomplished rider I decided not to take my camera along, but did snap a couple of pictures with my Blackberry.

Disclosure: I went on the horse ride as a guest of Heavenly Stables and received no additional remuneration to write this post.  All views expressed are my own.
Posted by Firefly the Travel Guy at 2:30 PM