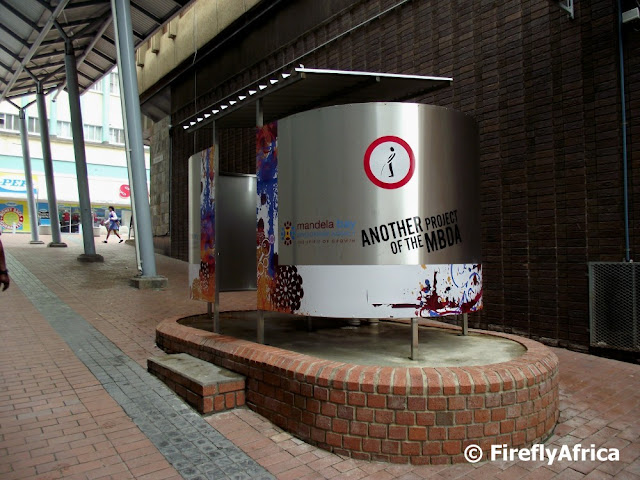 One of the first projects done by the Mandela Bay Development Agency (MBDA) was the upgrade of Govan Mbeki Road (Main Street) and surrounds between Russel Road and the City Hall.  Down one of the side roads you will this little enclosed structure (one of about two or three in the area) with a sticker of a man having a relieving himself.  Yes, it is, as they referred to it, a pissoir.  The reason for these toilets to be put up were to try and stop people from just doing their thing down the side roads against the buildings.  So next time you're passing through an alleyway (yeh right) in downtown PE and see a guy drawing a wet line against a building, just tell him, "For goodness sake man, go and use the pissoir."

Update: Thanks to Diana of Elephants Eye for pointing out that its pissoir and not pissoit as I had it before. No wonder I couldn't find the word on Google.  The definition of pissoir according to Wikipedia is: "A French invention common in Europe that allows for urination in public without the need for a bathroom while also avoiding the possibility of public urination onto buildings, sidewalks, or streets."
Posted by Firefly the Travel Guy at 2:13 PM