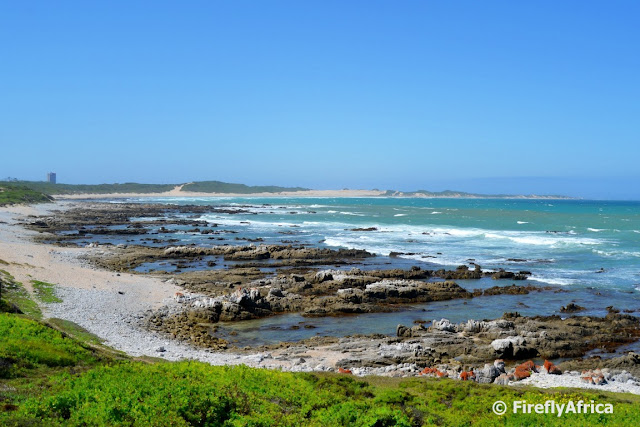 Standing at the view point on Marine Drive close to Noordhoek looking back at Cape Recife you can see a section of sand dunes in the middle of the coastline.  These dunes form part of the Noordhoek dune field, one of three driftsand bypass systems that used to take sand into Algoa Bay.  The other two are the Drifsands and Cape Recife dune systems.


The main sand bypass, known as Dritsands, covered the whole area between Schoenmakerskop and Summerstrand.  In the late 1800's the dunes started to threaten Port Elizabeth and plans had to be made to stabalise them.  At first a steam train was used to dump the town's garbage on the dunes and you still find areas where pieces of old bottles, plates and other objects can be found.  In the beginning of the 1900s the area was stabilised by planting Australian wattles such as Rooikrans and Port Jackson as well as Eucalyptus trees planted in an attempt to start a commercial forest.  This stopped the Driftsands dune field from moving sand into the bay.


In the 1960's the municipality built sewerage maturation ponds in Cape Recife.  These fell right into the path of the moving Noordhoek dune field and a decision was made to stabilised the leading edge of the dunes by planting vegetation.  From the angle of the picture the back end of this dune field can be seen.


Before the reclamation of Driftsands, about 170000m3 of sand got deposited into Algoa Bay and onto the beaches every year.  After Driftsands was reclaimed, the sand entering the bay from the remaining two dune systems dropped to around 78000m3 a year.  This again dropped to only 26000m3 a year after the Noordhoek dune field was stopped in its tracks.  The only sand being deposited into the bay now is from the small Cape Recife dune field next to the lighthouse.
Posted by Firefly the Travel Guy at 9:59 PM