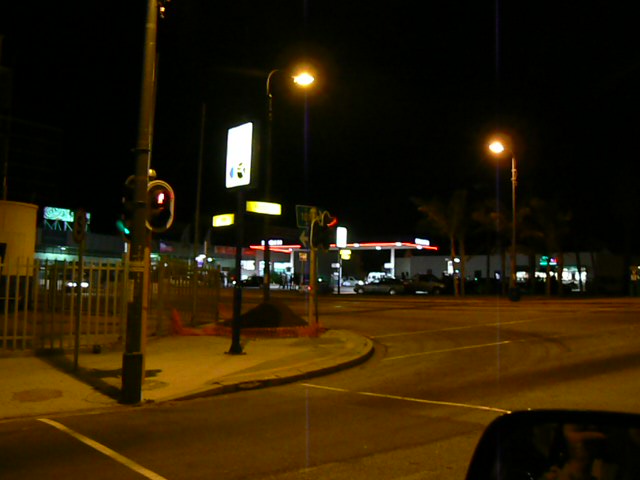 This isn't the greatest photo, again the light was green in our favour and there was no time to compose or zoom. It was taken recently from the intersection of Russell Road and Rink Street just before 5am on a Saturday.

The Parliament Street all night party begins to ease up, and the last revellers converge on the apron of the Service Station across the road, dancing to music that blares from various cars. All this would be quite festive if it wasn't for two unfortunate habits... urinating in the street and breaking the liquor and beer bottles as they are emptied. Since we have been doing neighbourhood watch patrols, I have had to repair my tyres 4 times, because it is sometimes impossible to see the glass on the streets at night, until it is too late.

We have seen cleaners trying to keep the street clean throughout the night, presumably employed by the committee that looks after the Parliament Street upgrade. I wonder if this doesn't just make the party-goers even less responsible for their actions... they rightly surmise that their bad habits are creating employment for others, so they carry on regardless. Rather than feeling bad about anti-social behaviour that costs the City a fortune, they feel good that they are benefitting the cleaners!
Posted by sam at 7:56 AM