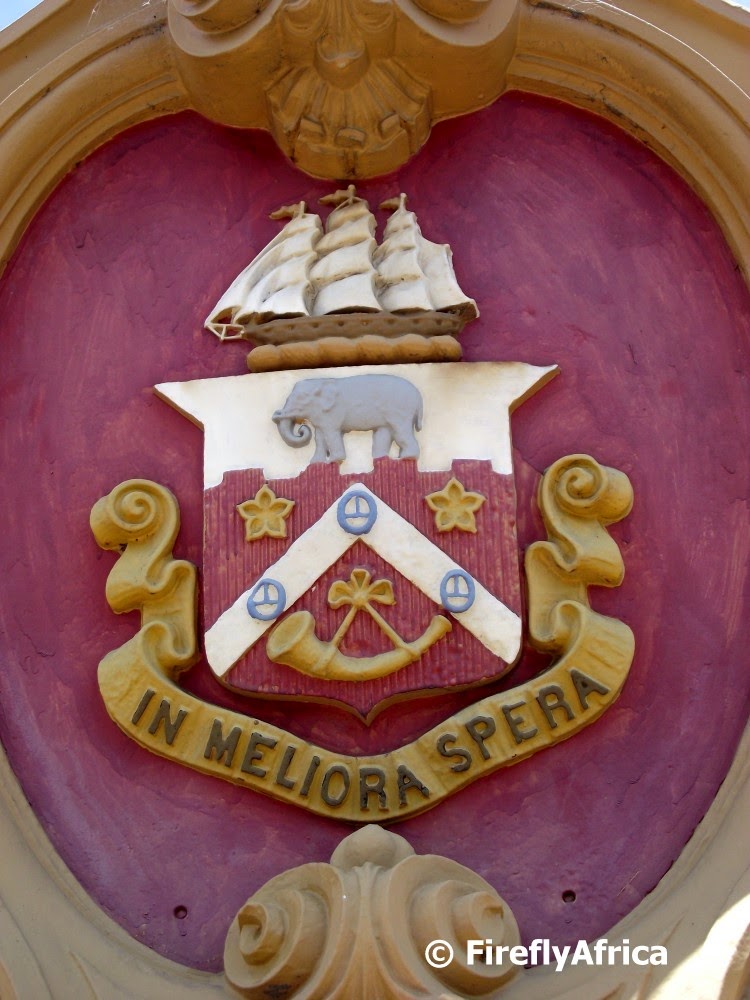 A week or so ago I went for a walk around St Georges Park and at one stage spent a little time at the Prince Alfred Guard Memorial.  On the memorial I found this old Port Elizabeth coat of arms and I decided to go and do a little research about it.  Turns out this one evolved into a more elaborate coat of arms that was used until Port Elizabeth became part of the Nelson Mandela Bay Municipality. The later arms (above) were officially granted on 6 August 1958 and were based on older, unofficial arms used by the city (the one I photographed).  The main differences were that in 1958 the heralds added a pair of anchors for difference and a mural crown.  The mural crown not only signifies civic authority, but allowed the addition of the arms of Jan van Riebeeck (gules, three annulets or), thereby signifying that the arms were South African.

In addition, the College of Arms has corrected the wording of the motto.  In the corrected wording, "Tu Meliora Spera", the use of the word "tu" (you or thou) is an injunction to seek out better things. Previously as can be seen in the top picture I took, it said"In meliora spera", which has a rather lackadaisical ring of merely hoping for better things. The arms were based on those of Sir Rufane Donkin, Acting Governor of the Cape Colony in 1820-21, who also named Port Elizabeth after his late wife Elizabeth. With the exception of the anchors, which were added as a mark of difference and an allusion to the harbour, the entire shield was taken from Donkin's arms.  Whether the Donkin family ever granted permission to use their arms is not known.
Rather strangely, the elephant is an Indian elephant. Donkin's arms had an Indian elephant and it was never changed on the Port Elizabeth arms to an African elephant.

The information was obtained from the Heraldry of the World website.

Posted by Firefly the Travel Guy at 2:30 PM