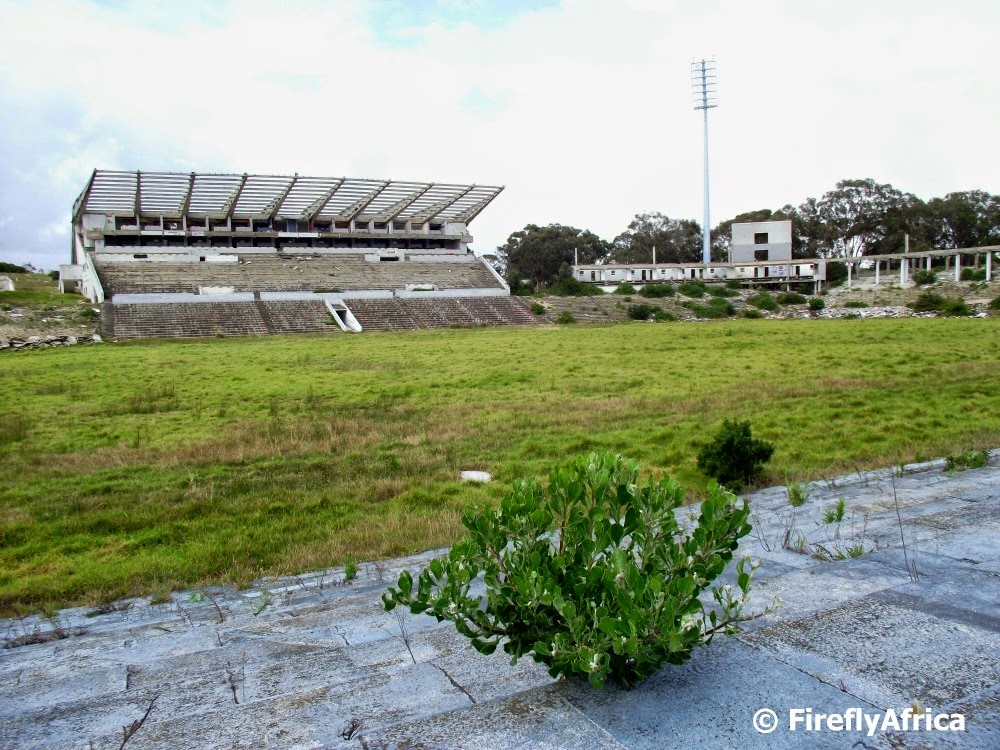 I remember the good old days of supporting the then EP Mighty Elephants at the Boet Erasmus stadium as a kid and later the Not so Mighty Elephants as a young adult.  I remember sitting on the cement steps of the open pavilion and buying peanuts and those little orange dried spaghetti snacks.  I have good memories of the Boet even if the EP team wasn't doing very well and there were only a couple of hundred people rocking up to watch a match.  Now its all different.  The Mighty Elephants are now known as the EP Kings and they are playing their home games in the new Nelson Mandela Bay Stadium in North End.  The Boet Erasmus Stadium in the mean time has been abandoned and stripped of all its dignity by thieves and plunderers while the municipality seems to turn a blind eye and not know what they want to do with this prime piece of real estate.  A couple of weeks ago I went for a walk through the old stadium looking for a Geocache in the area and ventured onto this ones respected field, walking through knee high grass right out to the middle.  I did shed a tear for what has become of this once revered field.

I borrowed this off the Geocache listing done by fellow cacher ChrisDen who got the information from the Weekend Post and Wikipedia.

Port Elizabeth’s rugby stadium, for years fondly known as “The Boet” survived floods and an embarrassing blackout while the world watched, but it was the 2010 Soccer World Cup that brought it to the end of its 46-year lifespan. It was the third oldest stadium in the country, officially opened on April 30, 1960, when Scotland played against the Springboks.

It was originally called the Boet Erasmus Stadium after a former Mayor of Port Elizabeth, but the stadium’s name was changed to Telkom Park in 1997 and then to the Eastern Province Rugby Football Union Stadium six years later, when Telkom withdrew its sponsorship. Eventually it became the EP Rugby Union Stadium when the governing body of rugby in the province followed the policy taken by the SA Rugby Union in deciding to drop the “football” from its title.

On September 1, 1968, the stadium was struck by flash floods which uprooted trees and damaged buildings. After donations from other rugby unions around the country, the stadium was repaired. Various developers have warned over the years that although the land is situated in a prime position, it is vulnerable to flooding. The ground received a facelift in 1985 when executive suites were built and the main stand was revamped. A hotel group expressed interest in buying the site, but plans never materialised.

The stadium was a happy hunting ground for the Springboks over many years. They have lost only one Test there throughout its existence.

The stadium is also infamous for the two historic battles that took place there. In 1974 there was the “Battle of the Boet”, one of the most violent in rugby history and a direct result of JPR Williams literally running from the other side of the pitch and launching himself into an unsuspecting Bok after a 99-Call.
The 99 call, used by Willie John McBride and the 1974 British Lions, was a pre-arranged all-out attack on the South African team if one of the South African players was deemed to have committed a violent infraction that had gone unpunished by the home referees.
Upon hearing the call of “99”, each player would find the nearest opponent and attack him. This was based on the correct assumption that the referee would not dare to send off all the Lions if they all resorted simultaneously to violence. The Lions won that game, which decided the series.

Another Battle of Boet Erasmus took place on 3 June 1995 during the 1995 World Cup fight between South Africa and Canada. (Although they did play rugby as well!) This match will also be remembered as the one that featured a 45 minute power failure just before kick off.
Pieter Hendriks, Springbok understudy for Chester Williams on the wing and his opposite number, Winston Stanley, tussled their way into touch, the latter being shoved though the advertising hoardings. Referee David McHugh was on hand and that should have been that. But Canada's fullback Scott Stewart charged in from some distance and struck Hendriks from behind. Then all hell broke loose. At the end of it all Dalton, Rees and Snow, seemingly being picked at random by the referee, were given their marching orders and 30 day suspensions. Hendriks, for kicking, and Stewart, as the originator of the brawl, were cited the following day and later suspended for 90 and 60 days respectively.

The Boet Erasmus surface had always been regarded as one of the best in the country. It could rain for up to an hour before the start of a game and it would still be fine. And rain it did on a wet and cold June day in 1980, when Naas Botha kicked a conversion which won the match for South Africa against the Lions 12-10, making the series safe. And who, fortunate enough to have been present at the stadium in 1970, could forget the two glorious tries scored by Springbok wing Gert Muller when the Boks downed the All Blacks at The Boet.

In 1991, several Kaizer Chiefs players narrowly escaped serious injury when retaining walls collapsed under the weight of fans leaning over the entrance of the stadium's tunnel. The walls and the spectators fell on top of four Chiefs players who had been going onto the field for a match against Orlando Pirates. Players, including international star Doctor Khumalo, were pinned to the ground but did not suffer serious injury.

The stadium was also home to Eastern Province which at one time was among the top four or five provincial sides in the country. It was a particularly imposing venue for touring international sides who traditionally had to play EP first on their tour - a system some criticised as being designed to “soften up” the team prior to the big matches.

The stadium has been abandoned and has been dismantled by vagrants and thieves. All that remains is the cast concrete structures.