Continuing with the Richmond Hill theme......
In the early 1800s, when the British Colonial Government in Capetown realised that it was facing opposition from the local tribes to its attempts to colonise the Eastern Cape, it came up with a plan to bring in a large number of British settlers to colonise the land, and act as a buffer against the marauding tribes. (Of course they weren't told this... in a climate of extreme economic hardship in Britain at the time, they were lured with promises of large tracts of land in wonderful sunny surroundings and endless opportunities to get rich...)

So in 1820 several shiploads of settlers were appalled to arrive in the bay and see in front of them a row of "barren sandhills". Rows of tents and piles of supplies were set out amongst the coastal dunes, and from this they had to start to build their lives and the town. As it grew, labourers were brought in to help load and unload ships, among other things. They were mostly from the Mfengu tribe, who were related to the Xhosas. They lived on what is now Richmond Hill, in traditional straw beehive huts. 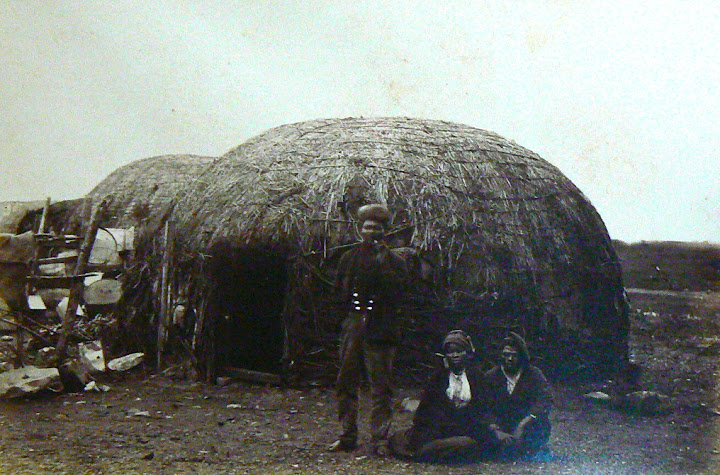 This is a vintage photo taken in the mid 1800s, of part of that village on the hill. (It would have been in the vicinity of the Edward Street Synagogue we showed you on Sunday.)
Posted by sam at 9:37 AM