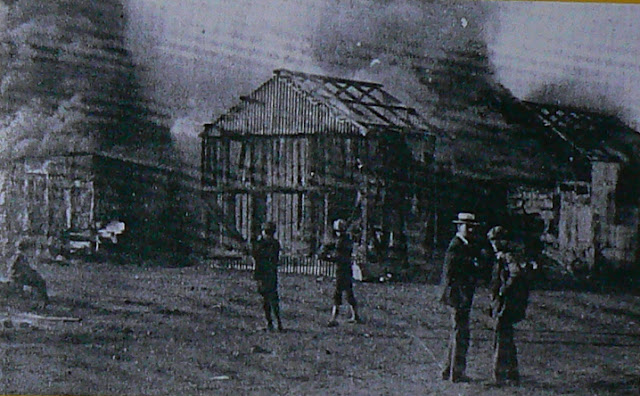 Continuing the Richmond Hill story from yesterday (and if you are new to this thread, go back to the post called Places of Worship #6 for the background history), the area known as the Strangers Location and the lands owned by the London Missionary Society had an outbreak of Bubonic Plague in 1903, and were burned down. The residents were relocated to the Red Location in New Brighton, about 6km away as the crow flies, so naturally getting to work at the Port became much more difficult for them. (This was before Apartheid became official policy, but certainly it set the foundation for later forced removals in the 60s and 70s, which caused so much heartache and suffering, as well as loss of heritage sites.) The photo shown here was taken in 1903 and shows the actual burning of the houses, while supervisors and spectators look on. It is a photo taken of the original which is on display in the Red Location museum.
Posted by sam at 9:18 AM