Yesterday we showed you Cape Recife. There are some trecherous reefs on the rocky coastline at this point, including the infamous Thunderbolt reef, so named because it claimed the HMS Thunderbolt in 1847. 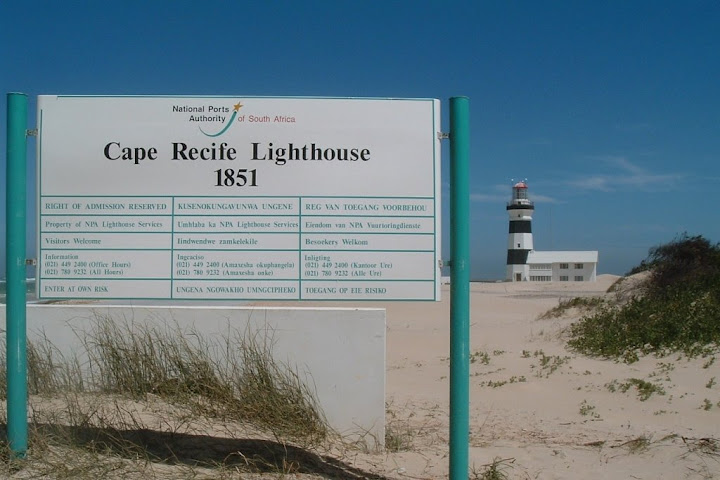 It was realised that a lighthouse was needed here, and so the Cape Recife lighthouse was built and commissioned on 1 April 1851. It is 24 meter masonry tower, painted with distinctive black and white bands.

Since then, despite the presence of the warning light, the reefs in the area have claimed several ships which have sunk within in the Cape Recife reserve. Some of them are still popular dive sites:
MV Pati, a Cyprian vessel, laden with a cargo of cement, on route from the Ivory Coast to the Persian Gulf. She struck Thunderbolt reef in March 1976, sinking to form a colourful artificial reef, teeming with fish and interesting artefacts.
The Itzehoe (1911), a German vessel which still has plates, dolls, moustache cups, pianos and other interesting artefacts.
SS Fidela, a brand new Steel Screw-Steamer, commissioned as a mail ship between Australia and New Zealand, but never made it to Australia, sinking after striking a reef in the Cape recife area on the 7th April 1873. She lies about 400 metres from the shoreline. During World War 2, practice bombs made of concrete were dropped on her. These can still be seen at the site.
MV Kapodiatrias (1985), a Greek bulk carrier conveying Manganese ore, Zirconium sand, Rutile and Sugar. She struck a reef and sank without loss of life involved.
Posted by sam at 9:31 PM