Ok, this just wouldn't be a city daily blog if I didn't show you this morning's newspaper headline..... 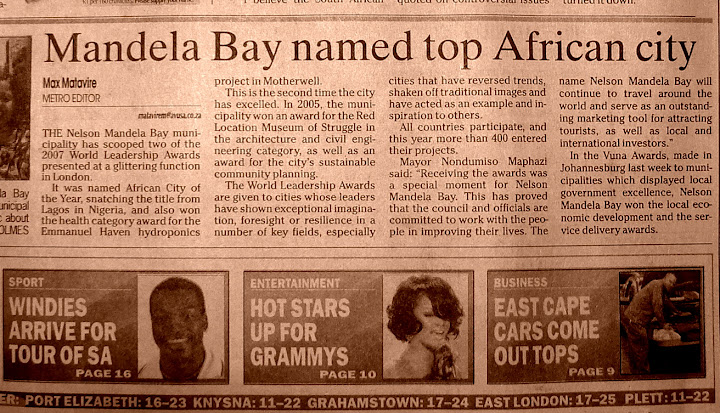 I mean that is quite an achievement for a town whose nickname was, until recently, the ghost on the coast!
In the 50s and 60s PE developed as the hub of the SA motor industry (very punny),
but in the late 70s many of the motor manufacturers and parts manufactures relocated, and the city went through a terrible economic depression. When we came here to live, in 1978, there were empty places to rent all over, and we could really take our pick and name our terms, owners were just too glad to find a tennant.
A real atmosphere of gloom pervaded the place, and the negativity became a well known feature of the city. Any business venture which was suggested would be knocked on the head with a comment like...oh it will never work in PE. .. It is still a feature of the PE psyche that, while the upwardly mobile in other cities brag about how MUCH something cost them, PE people will brag about what a BARGAIN they got!! Things like art, and services like design consulting sell for much less here than they do in the rest of the country.... because people here will just not pay what they consider to be inflated prices for luxury goods.
Even property prices have only recently soared to catch up with those in the rest of the country.
So against this background, the Municipality has done an amazing job of turning things around, bringing new initiatives, creating jobs, and instilling a new sense of pride in the city... the award is well deserved. 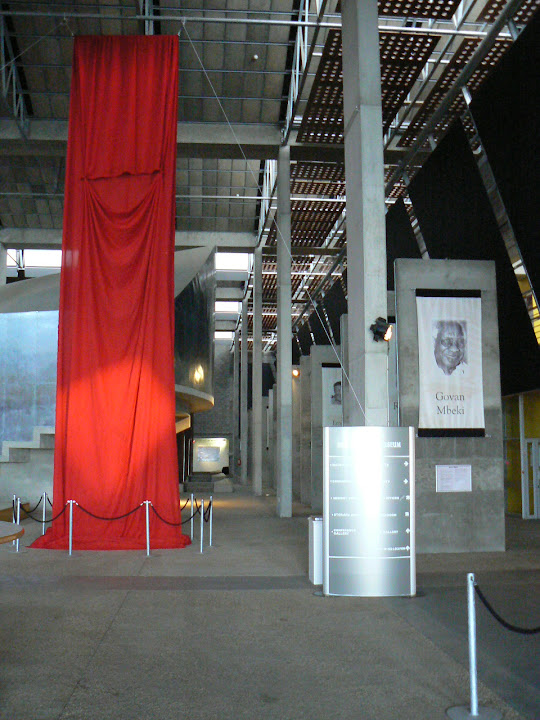 Anyway this is meant to be a photo blog, and a newspaper article hardly qualifies, so here is a shot of the wonderful award winning Red Location Musuem, mentioned in the article. It is a really amazing place, and we will show more of it in the future, but if you want to know more about it, I did a post with lots of photos on my blog here. (the photos are small to save on my uploading allowance, which is rapidly running out on that blog, but you can click on them to enlarge).

This photo shows the main lobby of the museum. The red cloth contains signatures of all involved in the project and community members. To the right, the row of pillars has biographies and pictures of the 'heroes of the struggle' for freedom from apartheid. To the left of the cloth, not seen here, is the Nelson Mandela Room, containing his biography in photos and documents, including some of his letters to his family, written while he was in prison on Robben Island.