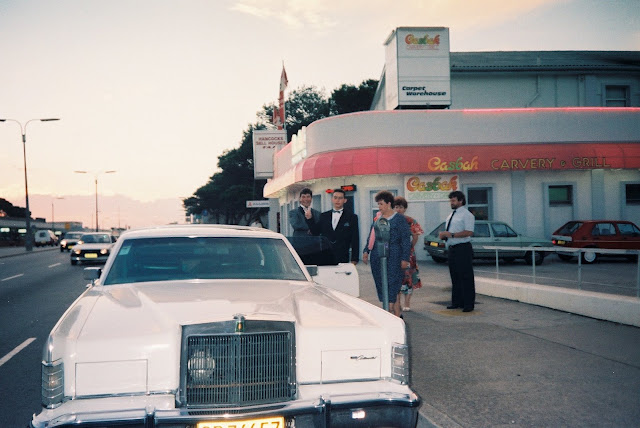 Since we seem to be on a nostalgic kick at the moment, let's feature another shot of PE in the 90s.... this is the Casbah Carvery that used to be in Cape Road, in the old Kine 500 complex. This was sent by Darren Theologo, who says :
"The photo of the Limousine infront of the Casbah Carvery & Grill also taken 1992 , People in photo From left to right _1. Riaan Roux , 2.
Darren Theologo , 3. Lillian Van Zyl , 4. Sharyn Theologo , 5. John Price._ The Event :- My mom(Sharyn Theologo) had hired John Price to drive my girlfriend (at that time) and i to her matric dance in his limousine.
You are right about it being the only limo in PE at that time..."
On the Facebook site "Remember PE when..." you will see many comments about the old Casbah double chicken burgers!
Posted by sam at 7:40 AM

Email ThisBlogThis!Share to TwitterShare to FacebookShare to Pinterest
Labels: eating out, port elizabeth, SAM posts pre Firefly, Then and Now