A whole chain of events leads to today's post... Gillian of the Fworld did a post on the demise of PE's roadhouses, and I commented on it. We got an e-mail from regular London visitor Jeanne (she of award winning food blog Cooksister fame), who saw the comment, and sent us a link to the website for the Casbah Roadhouse. I wrote to them and got permission to publish a couple of their old PE pix. 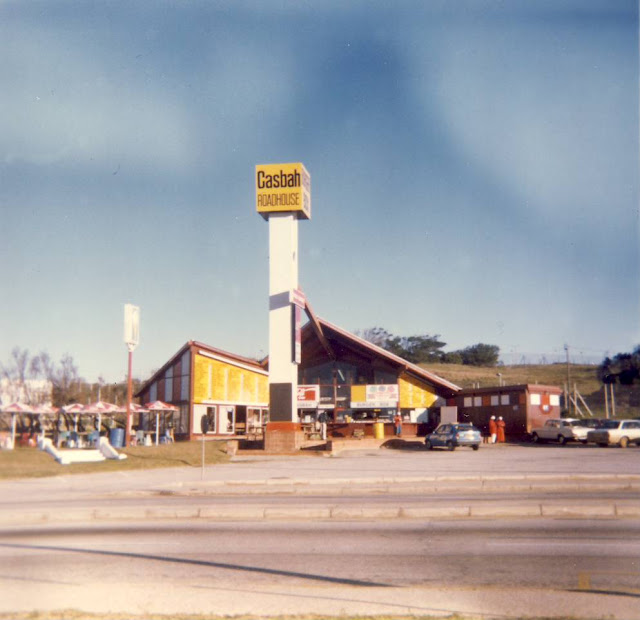 This is the old Casbah on the beachfront, taken in 1992, in what later became the sailing club building. Check out how bare the hill is behind it! We'll go and get a current view of this later and hopefully post it tomorrow.
A history of the Casbah was also sent by Darren Theologo, thanks...........
"On the 29th of January 1955, Smittys Teapot, in Brakpan, was taken over & transformed into Casbah Roadhouse by Sylvia Kongos and her brother Peter Theologo. The other brothers, Evangelo(Ponch), Russel(Lucky), Costa & Johnny soon joined them.The name "Casbah" was taken from the show Casablanca.After gaining experience in that first family venture, the brothers went their separate ways and opened their own roadhouses.Evangelo, or Ponch as he was known, started his roadhouse career in Brakpan, but then went on to open roadhouses in Alberton, Wemmer Pan, Johannesburg, Malvern, Benoni, Vereeniging, Krugersdorp and Port Elizabeth.Ponch always believed in VFM. Value for money. Everything that you made for a customer you had to make as if you were making it for a friend.Evangelo(Ponch) Theologo is known as the “King of Roadhouses”."

If all this reminiscing about the good old days in PE makes you nostalgic, do yourself a favour and hop across to the Facebook discussion called "Do you remember PE when....." .... great memories there from PE people all over the world!
Posted by sam at 10:21 AM