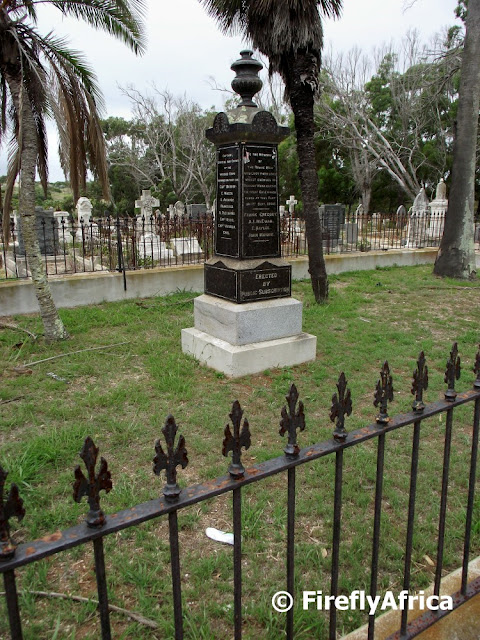 I took some time at the 1902 Great Gale Memorial in the South End Cemetery last week and tried to imagine myself what that day must have been like.  On Sunday, 31 August 1902 there were 38 ships at anchor along the then North End Beach.  Rain and a south-easterly wind started to lash the bay and by midnight the storm turned into a hurricane.  By the end of the storm on 2 September 1902, 18 of the ships had been stranded on the beach, while the rest all had major damage.  The dead were buried in the South End Cemetery and thousands lined the route to the cemetery as the funeral processions went by with surviving ship-mates carrying the coffins of those that died during the storm. 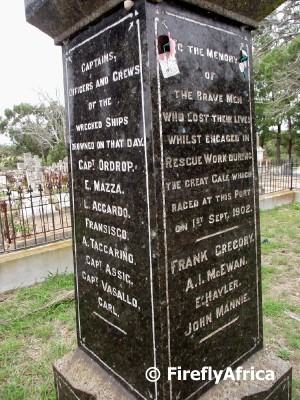 During the storm four men from the town tried to take a rope out to a ship to try and help the sailors ashore.  More tragedy striked when their line broke and all four drowned.  Their names are also inscribed on the monument.
For more information and a account of the Great Gale, visit the Christiania Seilskuteklubben website and scroll to about halfway down the page.
"Never before in its history has this port suffered under such overwhelming disaster as we record today. On Sunday morning some 38 craft rode at anchor under the leaden sky. Heavy rains had fallen and the wind gradually rose until, as the shadows of evening hid the shipping from view, a fresh gale was blowing in from the south-east, which, as the midnight hour was reached, had developed in to a hurricane. As the turmoil of wind and wave continued, so the toll of ships mounted, until 18 vessels were aground, with a raging sea adding a high toll of human lives.” - The Eastern Province Herald, 2 September 1902
Posted by Firefly the Travel Guy at 2:30 PM