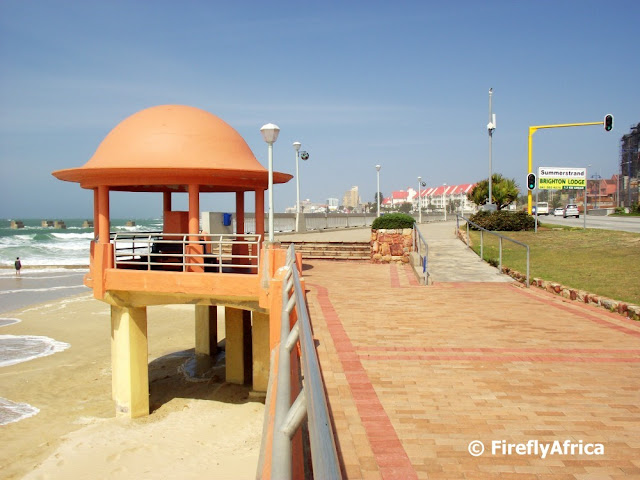 One of the older features on the Port Elizabeth beachfront is the Tin Hat next to Humewood Beach.  It's been around for yonks and I am sure it has some kind of significant meaning. Unfortunately there is no plaque on it (anymore) and I couldn't find any information other than references to it on the internet.  My guess is that it has some relevance to the Order of the Tin Hats, but I don't want to assume without any facts.  If I do find something, I will update the post with it.

UPDATE: I have had a fantastic response on this post and would like to thank Ziggie Keil as well as John & Lynn Gregg (as well as their contacts in Moth) for the info e-mailed to me.  So here are the facts:
The Tin Hat on the beachfront has got nothing to do with the Moth, isn't a memorial neither does it have any military significance. The Governor General of the Cape (Prince Arthur of Connaught as well as Princess Arthur) paid a short farewell visit to Port Elizabeth in 1923.  On this occasion Prince Arthur opened the Campanile and laid the foundation stone of the First Scouts Hall in North End.  Princess Arthur opened the "Princess Promenade" in Humewood which was built in sections over several years.  The official opening took place under the Promenade Dome, designed by the Assistant City Engineer JJ Burt, on 6 November 1923.  The Promenade Dome is commonly known as "The Tin Hat" from its resemblance to a First Word War helmet, but couldn't have had any connection to the Moth order as it was only founded in 1927.  A bronze plate was affixed to commemorate the occasion, but this has been long gone of course.

Credit to the details above goes to Margaret Harradine from her wonderful book titled "Port Elizabeth - a social chronicle to the end of 1945".

ANOTHER UPDATE: The Promenade Dome has a twin in  the De La Warr Pavillion Bexhill on Sea Sussex in the UK.
Posted by Firefly the Travel Guy at 3:00 PM